Track Toronto: a new project to collect and map songs about Toronto

The following is a guest post from Track Toronto, a new project to collect and map songs about Toronto – the project aims to create an interactive archive of songs about the city –  with the ultimate goal of allowing listeners to wander the city and discover songs as they go.

There’s something magical about learning that Leonard Cohen’s Closing Time was written about the now shuttered Matador Club at 466 Dovercourt, or that the house you think you’re standing in front of at 555 Spadina Road is actually a hidden Toronto Hydro sub-station, and yes, there’s a song about it.

Living in a city like Toronto is exciting because of the constant process of discovery.  We’re always being confronted by a shifting collective realm, deeply layered and densely populated by a diversity of voices.  It’s touching to be able to connect with others through a common experience of place, and this happens in many ways.  We want to find and share the moments where this can happen through music.

Our experience of music is increasingly intimate and solitary.  We carry our personal soundtrack around with us, listening to private portable devices.  Encountering a connection between music and a familiar location can drag us back out into the public realm. This enriches our relationship to the music, the place, and our fellow city dwellers.

Inspired by the [murmur] project, we will post physical markers around Toronto allowing people to discover and listen to songs about the place they are in, encouraging them to navigate the city and its diverse musical landscape at the same time.

We are at the very beginning of this project, and we would love to hear from anyone who can suggest a song related to Toronto – especially local musicians. The connection between song and site can be of any type. It could be expressed through lyrics, or simply exist through the experience of the song’s creators.

We’ve plotted all the songs we’ve found so far on a map – and we are looking for help to build the collection!  The more suggestions the better!
Here’s how you can participate: 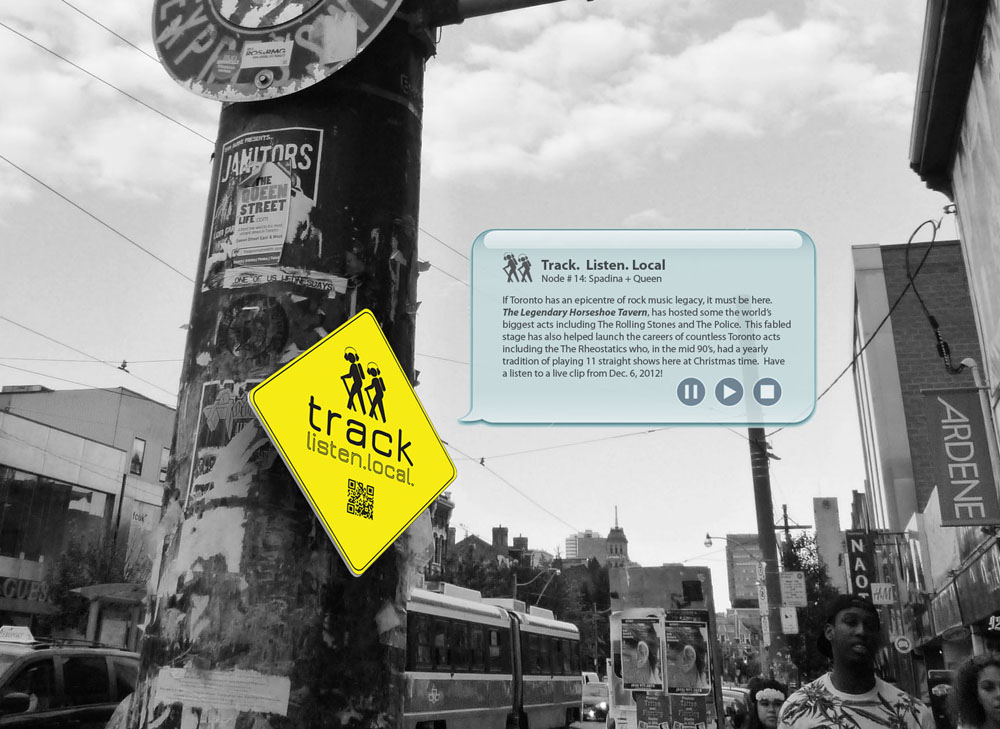 Track Toronto is: Lauren Barhydt, Chloe Doesburg, Jonathan Tyrrell. We are architects & musicians (well truthfully only one of us is a musician, that’s Jonathan – of the band the Ketch Harbour Wolves)

The project began out of a conversation we had at NXNE 2013.  Jon had just attended a panel discussion which introduced the 4479 Toronto Music City brand.  This kind of collective effort between music advocates, city council, and Toronto tourism was really inspiring.  The Ketch Harbour Wolves had recently released their album “Queen City: Volume 1″ (planned to be the first in a series of 3 albums) in which each song relates to a specific site within the city. We got to talking later that night before The National show at Dundas Square and we got really excited about the possibility of registering this kind of virtual map in the physical city.  The [murmur] project was a natural precedent for this and got us thinking about gathering other songs about Toronto into an expandable archive that could be built, and experienced, by anyone in the city.