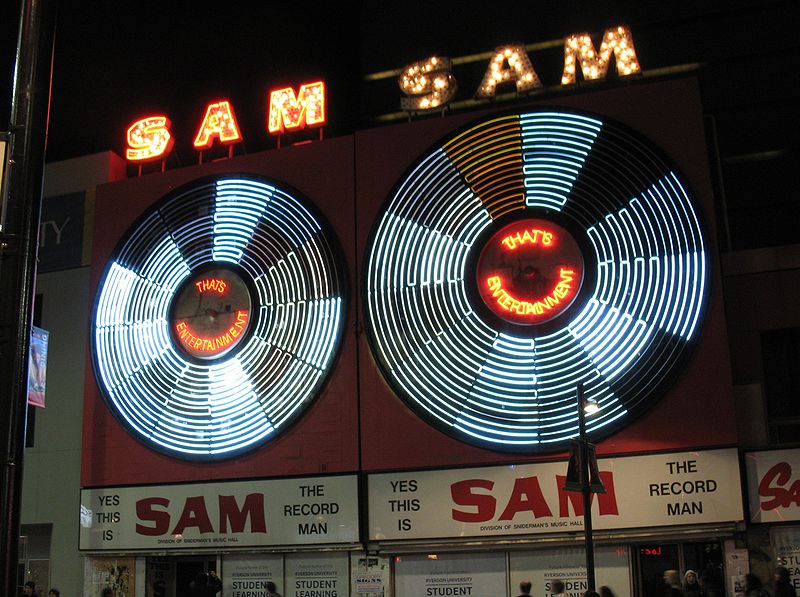 The iconic Sam The Record Man sign is one step closer to having its neon vinyl records shine again on Yonge St.

As reported by the Toronto Star, Ryerson University has issued a request for interested qualified companies to bid on installing the sign on top of the city-owned 277 Victoria St. building facing Yonge-Dundas Square. A ‘Toronto Music City’ sign will also be constructed vertically along the building.

In 2013,  SOS: SAVE OUR SAM and 4479 spearheaded campaigns to salvage the neon landmark after news surfaced that Ryerson would no longer be putting the sign up at the original 341 Yonge St. location. Many artists and members of the music industry including Gordon Lightfoot, Feist, Gord Downie, Anne Murray, and Daniel Lanois voiced their concern through open letters to council, which were published on 4479’s website.

In 2014, Toronto City Council approved the request to have the sign reassembled at a new location, which was then decided to be the roof of the Toronto Public Health building at 277 Victoria Street. Since Ryerson’s purchase, the sign has been kept in an undisclosed storage facility awaiting its resurrection.

4479 commends Ryerson’s initiative towards the sign’s reinstallation and once again thanks the members of the community who voiced their concern with their city Councillors.