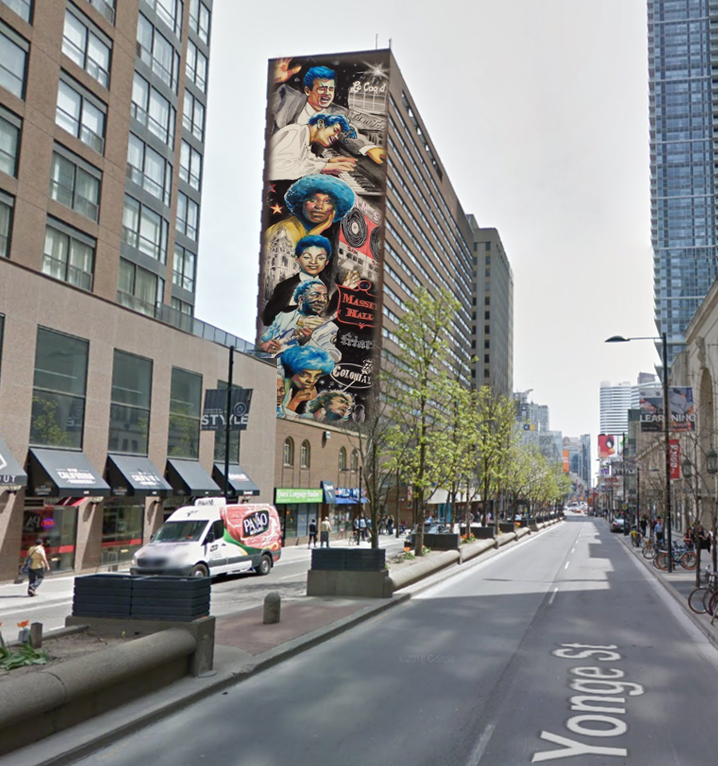 Located on the north side of the Toronto Community Housing building at 423 Yonge Street, the soaring mural will feature prominent figures of Yonge Street’s music scene in the 1950’s and 60’s. Gordon Lightfoot and Ronnie Hawkins, who are featured on the mural, joined Downtown Yonge’s Executive Director & CSO Mark Garner and journalist Nicholas Jennings to introduce the mural.

Hayles’ dazzling 70-metre mural is part of the Downtown Yonge BIA’s music strategy, which launched last summer in an attempt to re-establish the area as a ‘Music Mecca.’ The mural also falls in line with the results of the BIA’s Yonge Love consultation, which found a desire for more public art in the area.

“Music is obviously a big part of our past, but Downtown Yonge’s musical presence is not just historical,” Garner says. “There are currently 14 live performance venues in the area, and we are delighted to add to the sweet sounds of the neighbourhood through Play the Parks – music programming in parks and public places.”

Earlier this summer, Hayles also revealed a mural at Oakwood Avenue and Eglinton Avenue West along Reggae Lane. The Yonge Street mural will take three months to complete, and is expected to be fully interactive through a smart phone app. A full rendering of the mural can be viewed here.