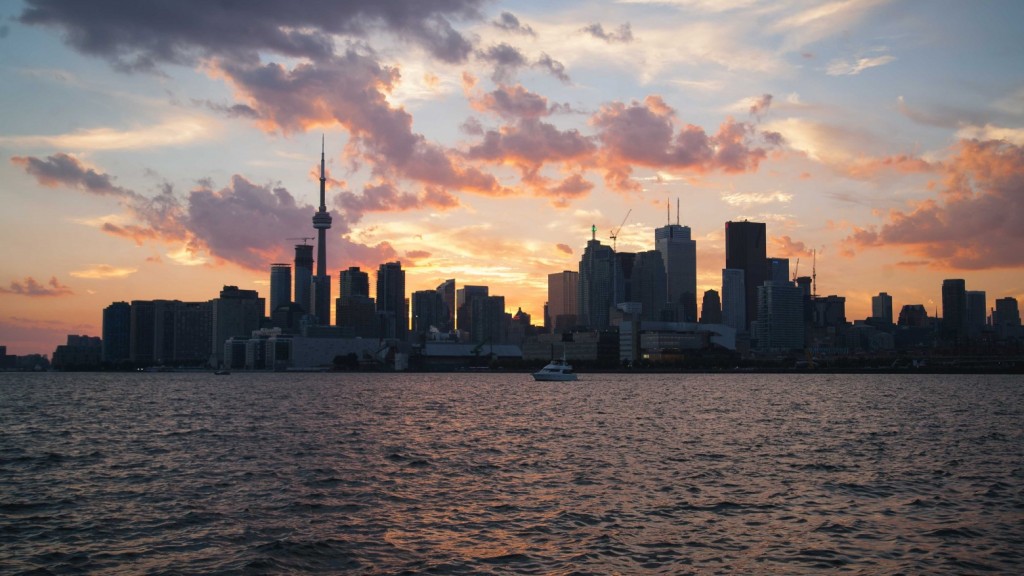 Celebrating its 22nd year in 2016, Toronto’s North By Northeast Festival has revealed the initial lineup for its highly anticipated Port Lands venue. Headlining the June 17 & 18 outdoor “festival within a festival” will be Father John Misty and NXNE-alum Ghostface Killah, with support from Mother Mother, Dan Mangan, Shamir, Daniel Caesar, Mick Jenkins, The Zolas, and The Devin Cuddy Band with special guest Jim Cuddy.

In February, NXNE revealed their plans to transform 155 Cherry St. to a new 10,000 capacity outdoor venue, when a letter from Ward 30 (Toronto-Danforth) councillor Paula Fletcher and Ward 15 councillor Josh Colle (Eglinton-Lawrence) was sent to the Economic Development Committee asking for municipal support for the festival. Later in the month, the EDC adopted the motion, stating city council will “assist North by Northeast (NXNE) as much as possible to help ensure its next stage of development be realized,” and citing the Austin-Toronto Music City Alliance as an influence in the decision.

NXNE will also bring a stacked lineups to venues across the city with its Club Land showcases. Today, organizers announced an Indigenous music showcase, co-presented by iNATIVEfest and Gunner Records, featuring The IMF’s (Stevie Salas and Bernard Fowler), Shawnee, Mariam, and DJ Shub at The Great Hall.

More artists for the Port Lands and Club Lands shows are expected to be announced, as well as the lineup for the new NXNE Future Land Interactive, Music and Gaming Conference at Yonge-Dundas Square and Ted Rogers School of Management. Single day, weekend and VIP passes for the Port Lands shows will be on sale on Friday, April 29 at 10am EST through TicketFly. 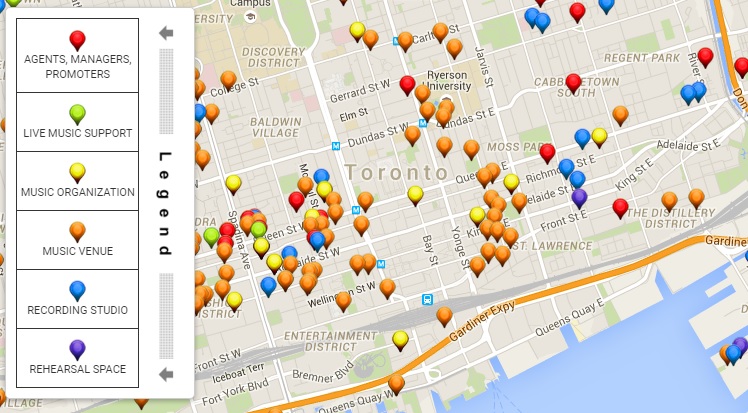 Yesterday, the City of Toronto posted the new Toronto Music Directory on its website. The Directory is an interactive map and a searchable catalogue of local music industry services, music retailers, supporting organizations, and music venues. Its purpose is to help local artists find the resources they need to be successful in the city, whether that means local recording studios, live music venues, or rehearsal spaces.

The release of this resource follows Toronto City Council’s recent adoption of the Toronto Music Strategy, which seeks to maximize the potential of Toronto’s music sector. The Strategy calls for the creation of public databases and information hubs like this one in order to help those within and outside Toronto’s music community find the resources they need.

The new Toronto Music Directory is available now on the City of Toronto’s website..

Toronto musical acts Xolisa and The Jay Snider Band have been announced as the next performers in the Live From City Hall series, a new bi-monthly music showcase celebrating the original sounds of Toronto’s diverse neighbourhoods. The showcase will begin at 5 PM on Thursday, April 21, 2016.

Following the performances, the City of Toronto’s Film & Entertainment Industries will host a free music-themed panel discussion and audience Q&A from 6:30 PM – 8:00 PM in the main floor rotunda at City Hall (100 Queen St West). Originally scheduled for March 24, the panel aims to help clarify questions about:

Earlier in the week, members of Toronto’s music community are welcome to attend the Toronto Music Advisory Council (TMAC)’s second meeting of 2016 on Tuesday, April 19, at 2 PM. These meetings are open to the public, and will occur in the Members’ Lounge at City Hall. TMAC will be discussing the next steps for implementing the Toronto Music Strategy, which was unanimously adopted by City Council earlier this month. The meeting will also feature a review of the proposed noise bylaw, a review of Toronto’s presence at the 2016 SXSW festival in Austin, as well as update on the Austin-Toronto Music City Alliance. 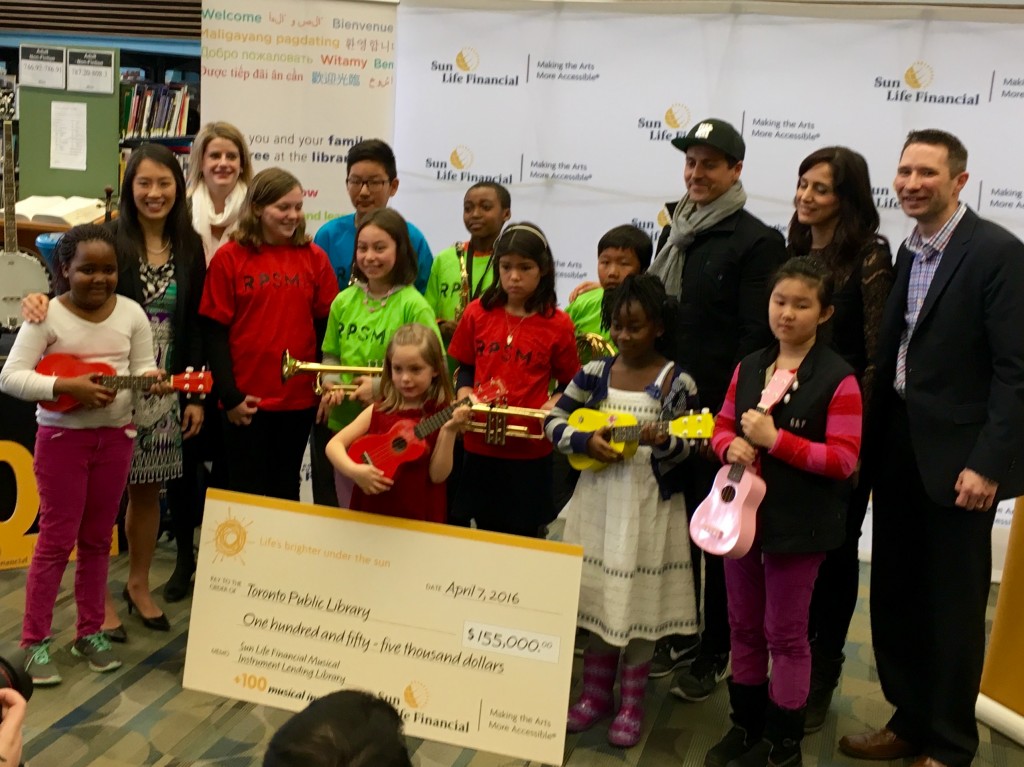 Students from the Regent Park School Of Music pose for a photo Thursday with Raine Maida, Chantal Kreviazuk and Sun Life representatives.

The Toronto Public Library is now offering a collection of musical instruments at its Parkdale branch that can be borrowed for free with a library card. Guitars, keyboards, string and percussion instruments are available with the exciting new initiative, which has been made possible with generous support from Sun Life Financial through their Making the Arts More Accessible program.

The Sun Life Financial Musical Instrument Lending Library is the first of its kind in the city, and also the first in public libraries across Canada. Canadian artists Raine Maida from Our Lady Peace and Chantal Kreviazuk were on-hand at the Parkdale Library to kick-off the new initiative, which also featured performances from students from the Regent Park School of Music. During the announcements, Sun Life announced the donation of $155,000 to the Toronto Public Library to help establish the new program.

The JUNO-award winning musicians were also the first to contribute to the month-long instrument donation drive with an acoustic guitar and keyboard. For Toronto residents with extra gently used instruments, donations are being accepted from Thursday, April 7 to Saturday, May 7th at the Parkdale library branch and Toronto/North York Long & McQuade locations.

All of the information on the Toronto Public Library’s new musical instrument lending library can be found here.

Last week, Toronto City Council unanimously adopted the Toronto Music Strategy. The first of its kind for the city, the Music Strategy will now guide the growth and development of Toronto’s music sector, serving as a blueprint for the City and City Councillors.

The Strategy is the result of the Toronto Music Advisory Council’s (TMAC) hard work, as well as a significant amount of public input. During a three week consultation in December 2015, the Music Strategy’s survey benefited from 6,100 responses from both members of the music community and the city’s enthusiastic music fans.

Recognizing Toronto’s status as a Music City, and the economic and cultural benefits that come with that, the objectives of the Music Strategy include liveable wages for performers, professional development for creators, music education in schools, and promoting the city’s many live music events. Key issues like affordable housing for musicians, the availability of rehearsal space, and the city’s regulatory regime are also addressed.

The adoption of the Toronto Music Strategy represents a win for Toronto’s music community. Going forward, we can expect to see TMAC and the City collaborate in identifying and implementing the most immediate priorities within the Strategy.